IMERT has planned a series of lecture on ‘Quality in Higher education’ in association with ‘Quality Plus’ and Srushtee’, for the stake holders in higher education. The first presentation and interactive session in the series took place on 19th March, 2016, at IMERT premises, which was attended by the eminent educationalists and professors from several educational institutions. Former Vice Chancellor of S.P. Pune University, Dr. Ram Takwale was the chief guest on the occasion. Dr. Jitendra Bhandari of IMERT welcomed the invitees and audience. The title of the presentation was ‘Need for Quality in the system of Higher Education to ensure Employability of Graduating Students.’ 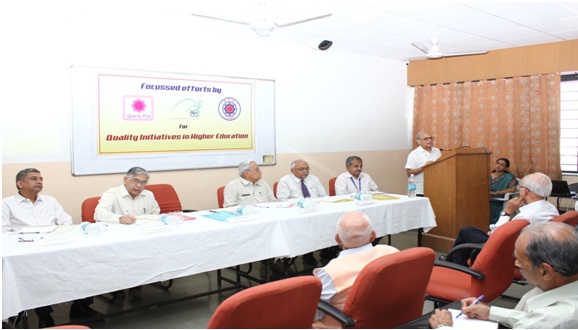 In his introductory speech, Prin. Jadhav of Marathwada Mitra Mandal expressed the concern about theory being given more importance than practice in today’s education. Jadhav sir explained with example the differences that exists between our own education system and elsewhere in the world. He underlined the importance of ‘Quality in Higher Education’ and how it is important for different stakeholders to come together for this cause, to ensure the employability of graduating students.

Dr. Ramesh Kasetwar founder trustee and CEO of ‘Quality Plus’, while reviewing the standards and realities of quality in higher education in different states of India, highlighted it as a need of hour. He further appealed the audience to sensitize the concerned on the issue and not to bask in the past glory of renowned universities like Nalanda and Takshashila. He put forth the expectations from the stake holders and the system of higher education at large and articulated how sincere and intentional efforts on the subject are essential for the benefit of the students at every level.

While elaborating on his perspective on the problems in higher education, Dr. Ram Takwale, explained that our model of higher education system is based on the needs of the industrial society of 19th and 20th century. He differentiated the NAAC and other models of quality evaluation that exists today. He stated that the quality is the function of the Model of Education. And the knowledge society of today and future needs a model which is based on the results of the process of education and not the content. He further clarified how the resources like open source digital libraries, Wikipedia and, digital processes of networking, cloud computing etc. are also changing the requirements from evaluation system and faculty resources, in higher education. He said, today in the digital age, we can learn globally and apply locally. He briefly indicated the efforts being put in this direction. According to Dr. Takwale, we have a choice of model building and experimentation, to create an appropriate education system model for the 21st century. This model also needs to incorporate the new culture and values evolving, for the benefit of the society.

Mr. Arnalikar, participant and veteran educationalist, talked about the policy level efforts from government and non government stakeholders and spelled the initiatives in quality, on behalf of Marathwada Mitra Mandal’s college of Engineering, being a trust member. Mr. Prashant Kothadia, Mang. Trustee of Srustee Foundation, stressed the need of original thinking and creativity among the graduating students and thanked the dignitaries and participants present for the program.